Beware the wizard blue,
of whom the stories true,
For he is not as he seems,
Instead built of crippled dreams,
and though his face be benevolent
it hides scores of lives lain torn and rent.
That hat of stars,
those hands of scars,
his locks of grey,
the years betray
his deeds through time
his work, his crime
upon man and ‘verse
He plies his gift, his curse
Though once proud and tall
Now stood bent and small,
But if the gold doth spend,
his powers still lend
any wish fulfilled
or blood be spilled,
to curse their names
to win adoring dames
there be no depth nor darkness,
his powers shall not harness
for no need nor want
can escape his font

thereupon a wyrmwood wand
he marks this oath, this bond.
But before you seek his aid
know, he is always paid
and the coin, it is but half
for in his den he hides a laugh,
the balance, it comes due late
and seemingly by fate
his schemes and plans
converge like hands
as they close in firm
you fight, you squirm
they squeeze for death
and upon your final breath
your life, your mind, your soul
they join the legion in the bowl
of his font, the very same
from whence your desires came
to keep him earning
to grant the yearning
of the next poor fool
as narrow and as cruel


Beware the wizard Blue,
for indeed the stories are all true... 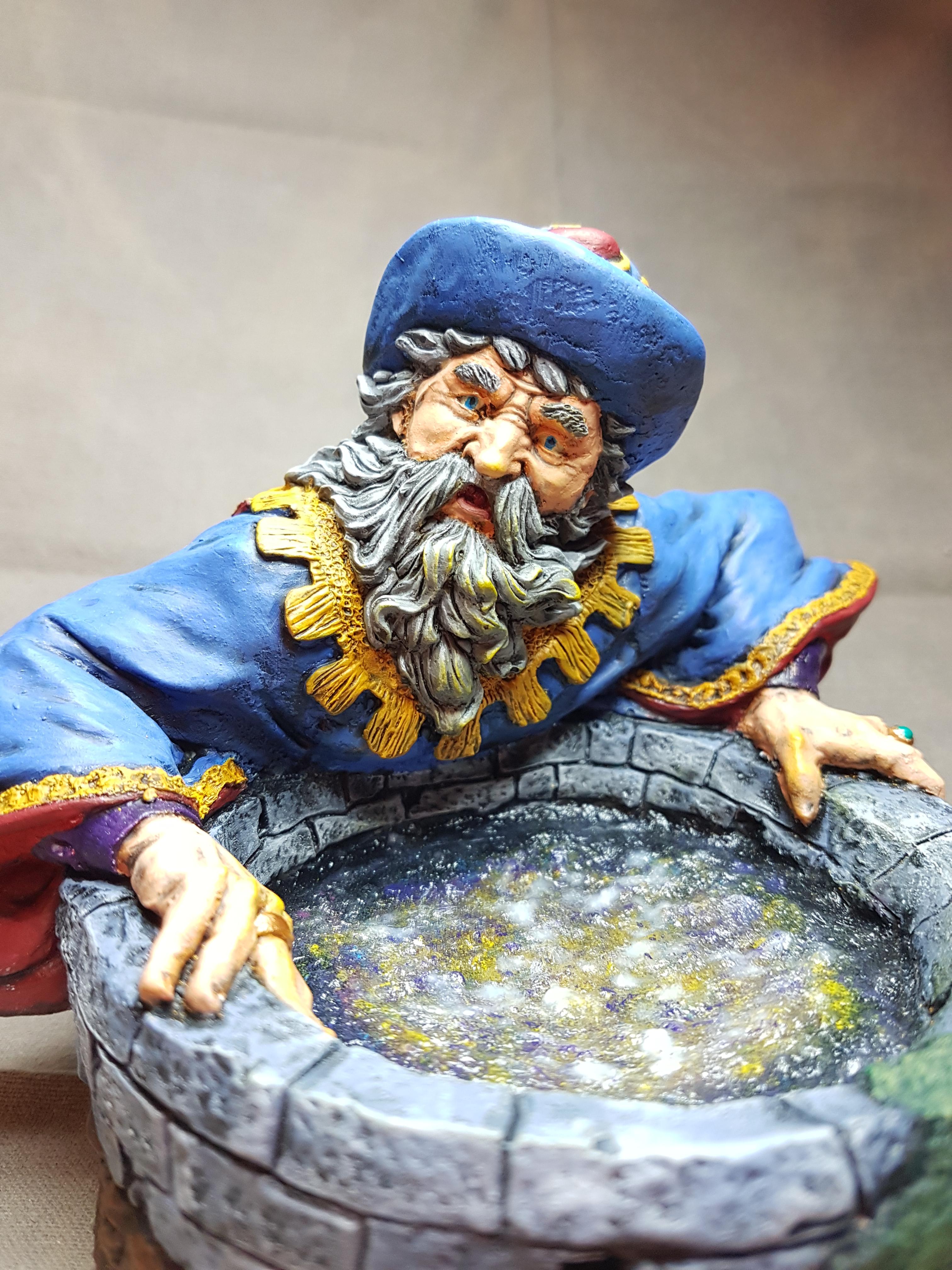 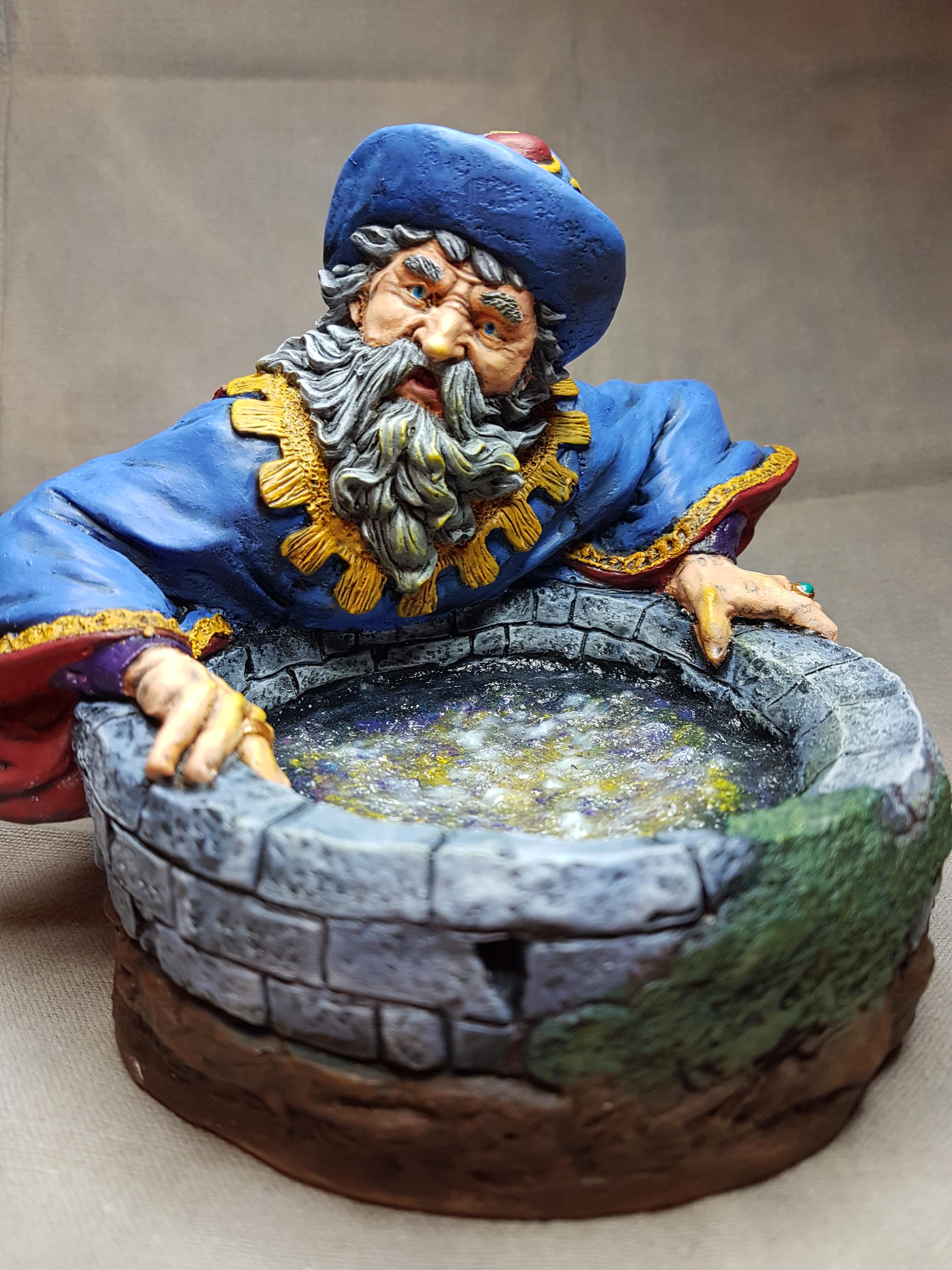 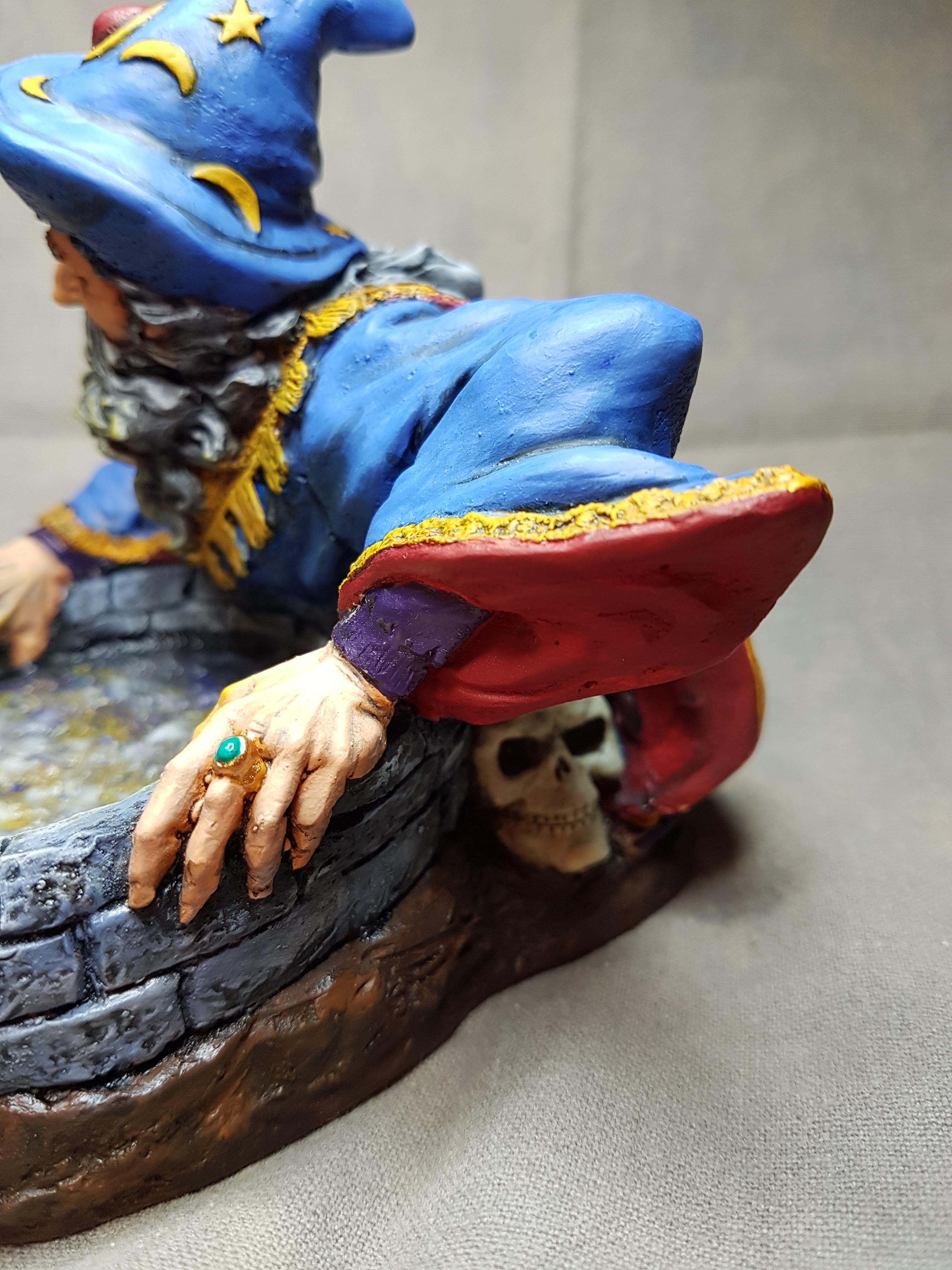 Malifaux Batrep : Kaeris vs the Victorias.

I squared off against a buddy of mine the other day, here is a completely objective and unbiased long form account of what went down.

"We" decided on a 40 'stone crew list game, which is to say Pete said 40 stone game, which was handy really because that's what I played last so I still had my crew written down in my trusty notebook.
My crew shaped up like so:
Kaeris with Arcane reservoir ( allowing me to take an additional card in my hand as long as this character lives) . Joss ( proxied in using the 'Johan' figure ) . 2 gunslingers. 2 Union miners. 1 fire gamin. Leaving me with a 6 stone cache.

My buddy, Pete ran his Viktorias crew which looked like this:
Viktorias. Killjoy. 2 trappers. 1 Friekorpsman, who upon entering to the word processing app on my phone auto-corrected to Fireworks man, which I am going to stick with from here on out.

1 200 square board, 8 varied terrain pieces that looked like this: 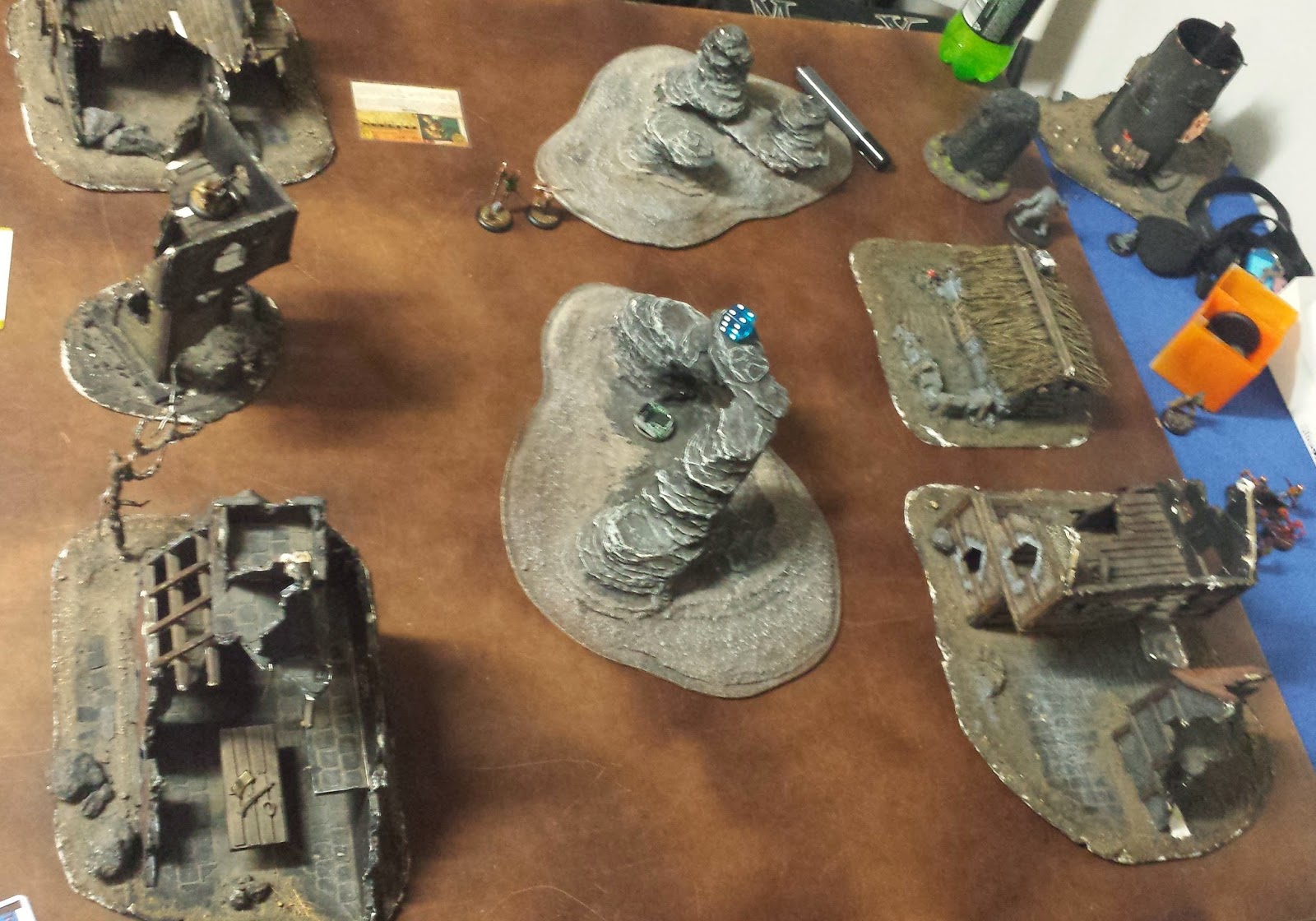 The schemes I chose were Assassination and Plant evidence, and announced neither, removing the possibility of additional VP.
Pete announced Murder Protege on Joss.

I win deploy flip 11-3, and chose to deploy on the bottom edge of the photo above.
I stashed Kaeris and the Gamin behind cover, wisely it would later turn out, as you can see on the left below. That's a trapper on high ground in the top left of frame there... 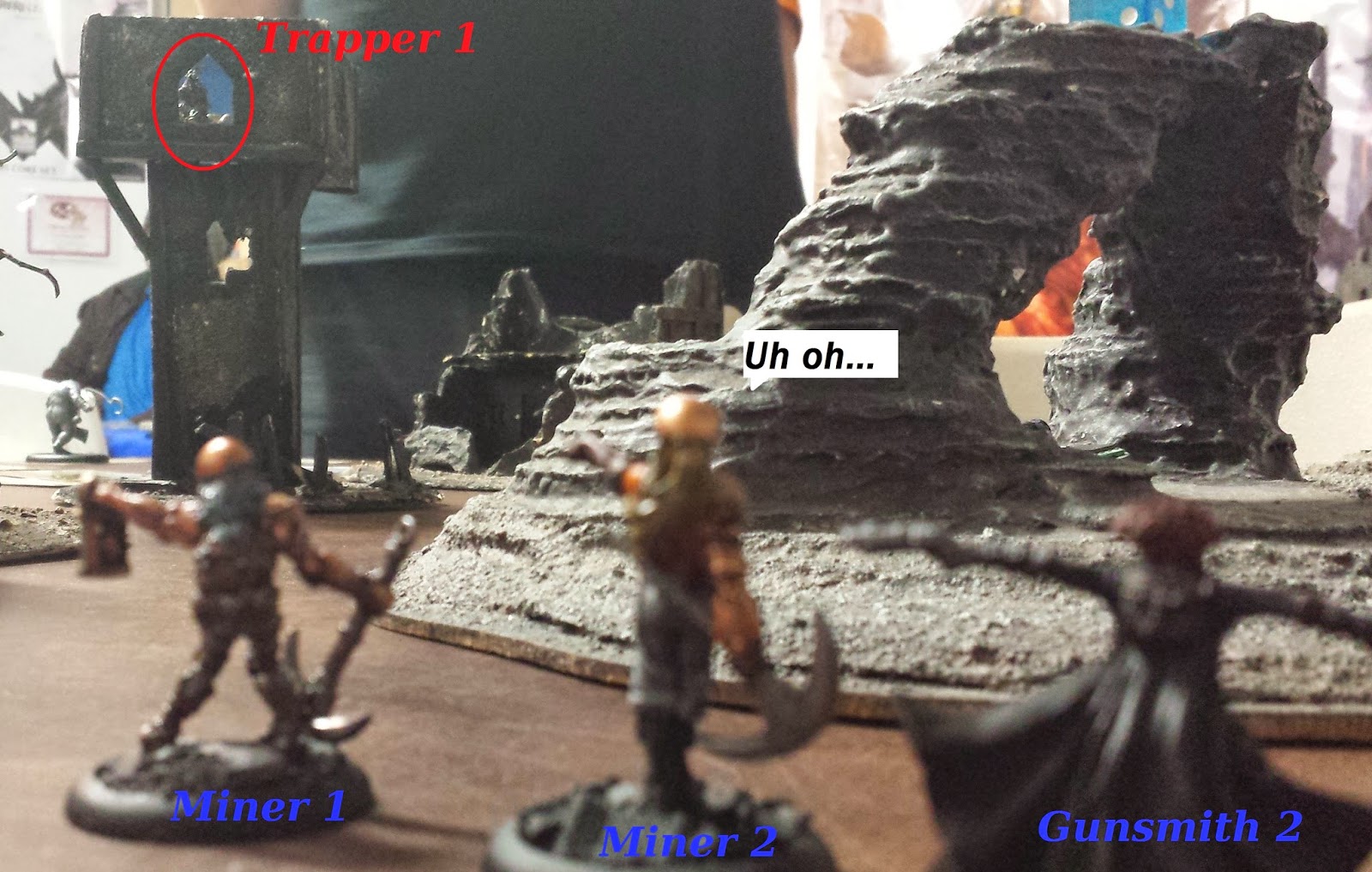 Pete deploys on the top edge of the table with killjoy buried and both trappers utilize shenanigans (From the Shadows) to get excellent line of sight straight out of the gate, see above right...
And that just about sets the tone for the game.

Pete wins the initiative flip 11-8, and elects to go first, blood lust positively luminous in his eyes...
He activates Trapper#1, the guy perched up on a rock in the left hand photo above. He uses a Focus action and Shoots at Joss, hoping to get rolling on his Murder Protege Scheme, but misses.
Keen to avoid that scenario, I activate Joss and bid him to bravely run away, using a double move to scoot behind some cover on the right hand side of the board, somehow convincing myself he was going to go fulfill the Plant Evidence Scheme. Pete then activates Trapper #2 who also uses a Focus action and then Shoots at Gunsmith #2 dealing 3 damage. I double move Miner #2 toward the Turf War marker at the centre of the field.
Pete: Activates his fireworks man and copies my brilliant stratagem of moving the expendables toward the strategy marker. I replicate the double movement maneuver with Miner #1
Pete activated Vikki of Ash who moves toward the Turf war marker and pulls Vikki of Blood with the 'Sisters in Spirit' upgrade, essentially allowing him to move both characters up the board during either ones activation. He then moves Blood Vikki again with his final AP for the activation.

I activate Gunsmith #2, injured as she is, and move her up the field and take a shot at Pete's Fireworks man without success.
Pete activates Vikki of Ash, takes a defensive stance and passes. I activate Gunsmith#1, moving him up the board and then take a shot at Vikki of Ash, inflicting 2 damage. At this stage Pete is out of activations, as Killjoy is buried until he loses another member of his crew, So I activate my Gamin and run him up the board toward the Turf war marker and then fly Kaeris up the left hand flank of the table to finish the turn.

Pete won the initiative flip 11-1.
Pete activates Vicki of Ash and moves her toward My miners, pops 'sisters in spirit' again, dragging Vicki of Blood with her and using his last AP to move again. Then, Pete uses a Zero action to hunker down and gain +1 Def. He then, through the power of chicanery and shenanigans, utilizes 'Accomplice' on Vicki of Blood, allowing him to activate her immediately.
Blood Vicki moves, activates Melee expert and deals 3 damage to Miner 1, which triggers whirlwind. Which goes like this:
Attack miner 2. Miss.
Attack gunsmith 2 dealing 4 damage. She Dies.
Attack gunsmith 1 deals 4 damage.
Zero action. Attack gunsmith 1. Miss.
An hour later It's my turn again. I activate Miner #2 and utilise improvised weapon to render 1 damage to Vicki of Ash. Because that's all miners are good for, Annoying your opponent....

Pete activates his fireworks man who shoots at Kaeris for 1 damage, triggering Reposition. He uses his second AP to hit replay and Shoots Kaeris again for 1 damage, triggering Reposition.
I activate my Fire gamin. He move up the board and Spits magma at fireworks man dealing 2 damage and imparting the Burning 1 condition, so at the end of turn, that 2 damage becomes 3, aw yeah.
Pete turn again, he activates Trapper#1 and shoots may gamin dealing 6 damage and triggering critical strike on the flip. The Gamin, predictably, dies. With his second AP, trapper shoots at Kaeris but misses.
I activate Gunsmith 1. Move and then Shoot Trapper 2 dealing 3 damage. Said trapper activates and shoots back dealing 4 damage, which would have killed him, but he's Hard to kill, so he survives on 1 wound. Naturally, Trapper shoots again, hits and flips the Red Joker on the damage flip dealing 7 damage. The Gunsmith dies and the Trapper triggers Reposition.

I activate Miner #1 who takes his improvised weapon to Vicki of Ash twice and Misses each time. Pete is out of activations so I round out the turn by moving Joss twice and then moving Kaeris, dropping a scheme marker and then moving her again.That brings us to the end of turn 2, at which point we earn 1VP each for having 2 guys in range of the Turf War marker.

I burn a Soul stone for cards, because I drew a handful of garbage. My gambit scarcely pays off, netting an additional 11 of tomes and a 9 of crows.
I win the initiative flip 13-8, So I activate Joss who moves into bas contact with the standing stone near Pete's board edge and drops a scheme marker.
Pete activates blood Vicki who Zero action's for +1 melee. He burns a Soul stone for mask suit and  triggers whirlwind as he attacks miner #1. the attack deals 4 damage killing the Miner. Vicki heals and then attacks miner #2. 4 damage, Attacks again. 3 damage. Miner Dies. Vicki heals again.
Digging deep to overcome the loss of my useless goddamn miner, I activate Kaeris who moves twice to drop a scheme marker. This signals the end of my activations, as I've gone from a position of numerical strength to being outnumbered.
Pete activates Trapper #2, who Shoots at Kaeris and Red jokers to hit... 6 damage. Armor 1 knocks it down to 5. Trapper shoots again, 3 damage reduced to 2. He then activates and double moves Trapper #1. Next up Fireworks man moves and decides to shoot Kaeris but misses.
Blood Vicki moves into contact with the Turf war marker and passes ending the game turn.
Pete earns a further 1 VP for Turf War.

Pete wins the initiative flip 10-6. He activates Trapper#2 who moves up to Joss and ties him up in Melee, without actually attacking. Yes, I realised why at the time, but It was pretty obvious victory was not a possibility. I activate Joss and use Pneumatic fist on trapper #2 dealing 8 damage. Trapper goes splat. Killjoy joins the game.
Pete activates Killjoy, punching Joss for 5 damage, but thanks to Armor 2, is reduced to 3. Killjoy Attacks again triggering onslaught and dealing 7 damage, and then 4 damage and Joss dies fulfilling Kill Protege.

With only 1 piece left on the board my options are somewhat limited. I activate Kaeris and move her into range of Pete's fireworks man and cast Flaming Halo. It succeeds and imparts the Burning 2 condition. with my 3rd and final AP for the activation Kaeris casts Immolation on  fireworks man dealing 5 damage.
Pete activates Trapper #1 and shoots at Kaeris. I respond by burning a Soul stone to prevent damage. He misses. Trapper shoots again and also misses. Next up Vicki of Ash uses 'Sisters in Spirit' to pull Vicki of Blood into base contact and then moves into melee with Kaeris. Activating his Zero action 'Setting Sun' before utilizing Accomplice to activate Vicki of Blood who Zero action's 'Falling star' the charge at Kaeris causing 3 damage, reduced to 2 by armor. On the second attack Pete Red jokers for damage causing 9 wounds. Kaeris explodes into a cloud of bloody chunks and metal feathers....
Fulfilling his unannounced Assassinate scheme.

On the whole the game played out much as I expected it might. things look OK for me for a turn or two and then the hammer drops. In this case the hammer being my opponents superior knowledge of his own troops, schemes strategies and the game in general coupled with my own complete lack of the previously mentioned areas of understanding.
I think I'll go for a shorter format recount next game where I whittle out the highlights of each turn and get some more images involved. Drop a comment and leave your thought on the format and any tips for playing Kaeris if you've got them, because I could sure as hell use them...

1 of 2 options for Heavy myrmidon kits for the Retribution of Scyrah faction, this chap has all the requisite components to assemble and field one of 3 possible variants. the Sphinx, the Banshee and the Daemon. I have played none of these, so any insight into their field utility is going to be entirely baseless, so let's not waste anyones time. 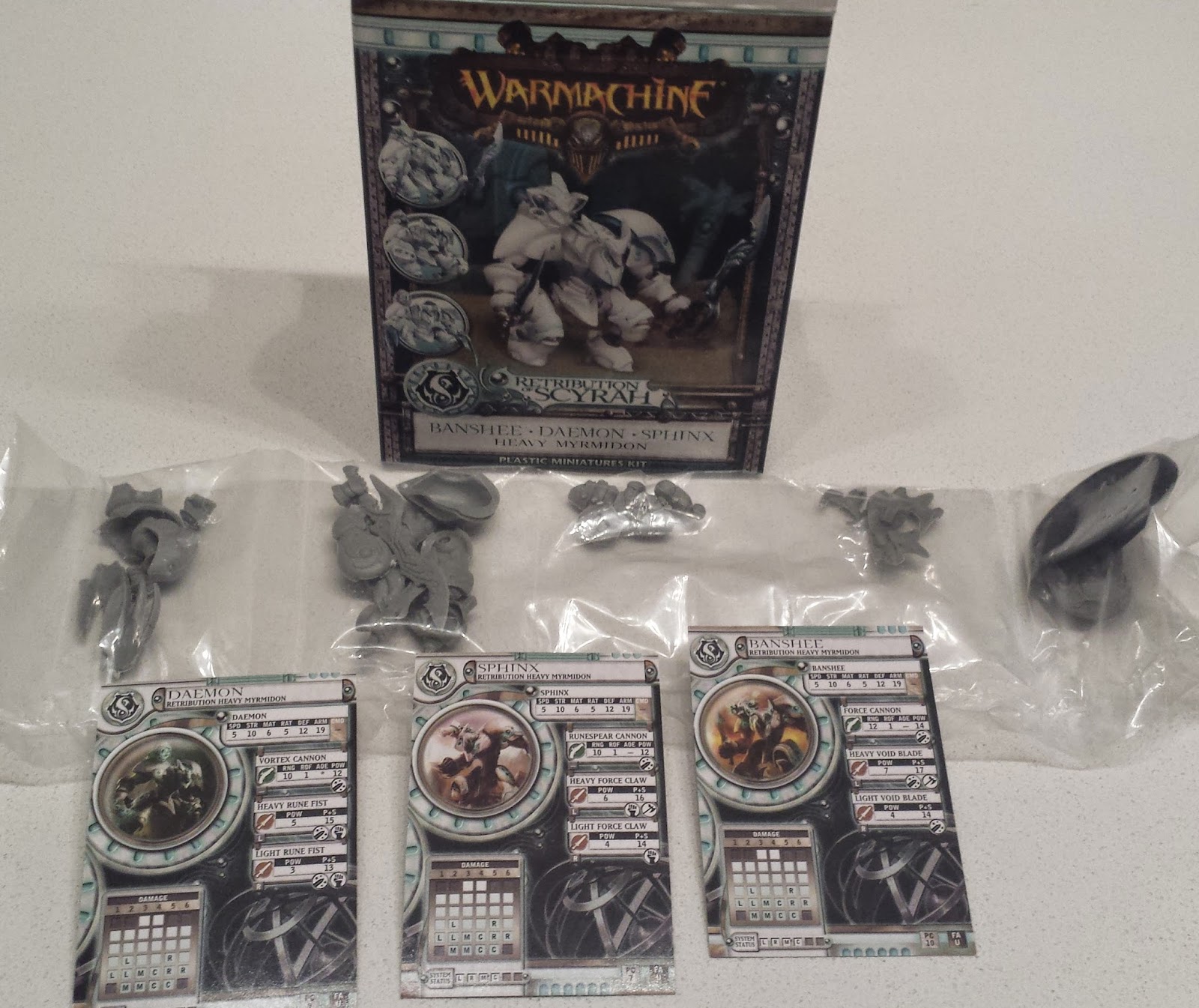 I gutted the box and displayed innards. Standard Privateer Press set up, components are clipped from sprue and baggied up in no discernable order or association. The trio of stat cards for each of the variants means you could theoretically magnetise the kit and be able to field the most suitable Myrmidon for that game's matchup. I am not that person... I will likely assemble the 'Banshee' version and be done with it. As I mentioned earlier, I'll open up the components and have a closer look soon.